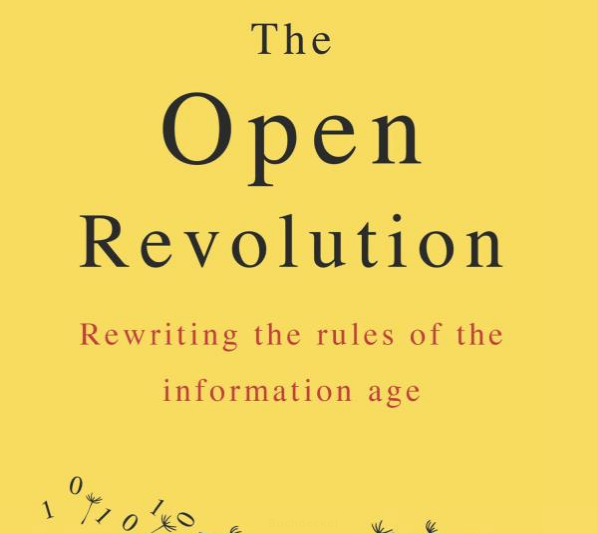 Even before attending a very thought-provoking keynote by Rufus Pollock at the European Data Summit in Berlin this October, I had already decided that his latest book „The Open Revolution“ would be my vacation read. I went in with two parameters: high expectations stemming from the rethorically fine performance of his speech (it was great, even though for techncial reasons there was no slideshow), and my knowledge of digital policy issues and open government in particular. I was a bit disappointed, to put it midly. Here’s why…

The book is super short, which I feel results in a lack of additional depth and a mostly cursory analysis. In particular, if you were a highly critical reader (which I wasn’t, I assumed to be more or less in his camp), you’d have a field day taking his arguments apart. The book would be better with more case studies, numbers, graphs, footnotes and analysis per each policy area (of which the book does not cover many, another problem). Instead, Rufus goes in circles repeating his argument, backing it mostly with a few anecdotes (mainly on patents), not all perfectly helpful for his cause necessarily (but they make for interesting story-telling).

I found myself outside his camp already a few pages in – because I expected so much more from the title. Missing – among other things – are a deeper discussion about the commons, about open data, about incentivization, and most of all much better arguments about the potential (realistic) criticism that would be expected to be hurled at him. Also not clear is how his systems of remuneration would work in practice. If, say, in music, we’d turn the world into a global Spotify, who’d invest in such a product, and most of all, how do we track who listens to what to pay the artists? There are too many open practical questions, let alone economic ones.

What his book is, is a thought experiment – a (pretty good) pamphlet maybe – but one where you feel like 90% of his thinking that went into it, and hopefully the research, is missing from the pages in front of you. In order for his open „revolution“ to take off, its followers would need something like an 800 page air-tight knock-out masterpiece bible that would convince anyone but the most stubborn critics.
This is not that book, unfortunately. Should you read it? Maybe, but lower your expectations.

Get it on paperback or kindle from: Amazon.de | Amazon UK | Amazon.com | Amazon.it | Amazon.es | Amazon.ca