The Perils of Dominance 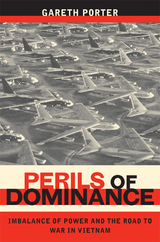 One of my hobbies is the Vietnam Conflict (I plan to read more about post-American phase soon), it’s origins, implications and conduct. That the conflict makes for a whole sub-genre of war movies is a different but not altogether unrelated matter. Vietnam was a huge issue for those young enough to remember student riots, Nixon and Woodstock, but for someone like myself it is a highly interesting academic study area. I have read a number of books, but want to point out one that I just finished that is particularly interesting for scholars of international relations. Gareth Porter’s Perils of Dominance is an excellent re-examination of the road to war, that does away with some common misconceptions and credibly builds a new hypothesis for what constituted the rationale for war and the factors that influenced foreign policy decision making in the pre-Nixon administrations (the war itself is not subject of this book). It should be clear by now that what’s known as the Gulf of Tonkin incident never happened, but what’s not so well known is how strongly all three presidents under examination resisted going to war and how over the decades their own national security bureaucracy mutated into a beast that was almost impossible to tame. That the „domino theory“ was more of a PR slogan than actual policy comes out nicely from this book, and one of the more enlightening moments is when the author has the reader understand how completely different the reality in Vietnam and the perception of that conflict in Washington was. It is a depressing fact that at one point, the North Vietnamese were ready to accept all demands and hold nation wide elections and accept South Vietnam, but that information was simply suppressed, ignored and rejected. Not by a president, but by an advisor. The book is a careful argumentation and reconstruction of incidents that takes a close look at the Russian, Chinese and Vietnamese perspectives before turning to the inner workings of the presidents‘ advisor circles. To cut it short, I found it to be a very informative analysis that will not change most people’s perception of the conflict but helps readjust the discourse and the history-writing. It is a very enlightening book but certainly not an introductory text, let’s call it a very advanced additional reading. Highly recommended.