TV Shows on the hot seat

One strategy to blog more is to write more often, but less. So I said to myself one sentence per show, and it got even better. Here are some shows I am watching or have watched recently, with some very short thumbs up and downs:

House of Lies. It started off as a satire on corporate consulting culture, and then veered off sort of into a sit com. I still love it for the characters, but it was definitely fresher in the beginning. 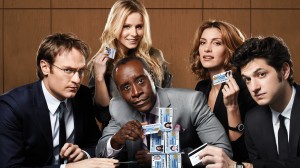 Justified. Raylan Givens is one of the coolest characters on television, and even though this is another show that was just so much more interesting in the beginning, I can’t turn this one off.

Community. I stopped watching this some time ago. It was such a nerdy and funny show with so much pop cultural references it was a joy to watch. At some point it just got weird and boring, I think that was a few seasons ago.

Californication. Oh Hank, you constant fuck-up. This show has its ups and downs, the second season was never reached again, but it’s still interesting and entertaining and there are constantly new characters that keep this interesting.

Vegas. I started watching a few episodes, and I liked it. Sort of like a prequel to Casino. I haven’t had the time to continue watching however.

House of Cards. An excellent show produced by Netflix. It’s like The West Wing for realists. It’s cynical and evil and hellishly entertaining.

Boardwalk Empire. This is a very epic series in the vein of Gangs of New York or The Untouchables. It had its downs and a few likeable characters got killed off, but now it’s getting really interesting again, can’t wait for a new season to start. Another high quality HBO show.

The Walking Dead. A zombie show make by Frank Darabont. Repeat that. The first season was a breath of fresh air and it made instant cult classic, it has since fallen off and turned into a character drama, but it does have its interesting moments, and there’s always hope that it will pick up again.

2 Broke Girls. It took me no more than half an episode to love this. It’s a classic sit com, but the characters are great, the lines are amazing and the episodes short bites that are easy to consume each week. No show has more running gags than this one.

Two and a Half Men. Charlie Sheen played himself, and now Ashton Kutcher is playing himself. I really can’t think of a reason why it’s so much different other than a different character being in the lead. It’s still very funny, it’s just different. I wish they’d  send off Alan at some point, he’s so annoying.

The Americans. The teasers where highly interesting, and the first few episodes show that this is a sophisticated show with lots of intriguing plot twists. A few episodes into the first season it becomes clear that this one isn’t a crowd pleaser, it’s a niche product. If you like spy stuff, watch this.

How I met your mother. A show that should have stopped a many many seasons ago. But damnit, I want to know who their mother is! 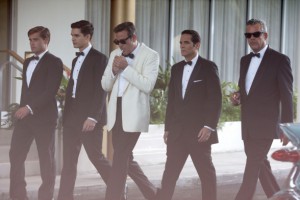 Magic City. A surprise hit, I loved this show, the characters, the atmosphere, the music, the girls. If you like gangster movies and the charisma of that era, watch it!

The Wire. I watched this one years after it went famous, but I caught up quickly, and soaked it up in a few weeks. It takes some time to get into, but then it turns out to be the best thing ever made for television, period.

The West Wing. Still one of the greatest shows ever made, stellar writing, great characters, and lots of educational content. Too bad they killed it literally for no reason at all.

Homeland. Adapted from an Israeli original, this show is gripping and controversial and intense. It got a bit ridiculous in parts and now you have the feeling they don’t quite know where to take it, but it’s still intriguing and was one of the best shows on TV the last year.

Deception. Kind of a guilty pleasure, but I find the family intrigues, the corruption and the undercover work extremely entertaining.

Band of Brothers. The mother of all mini series carried on the tradition of filmmaking introduced by Saving Private Ryan and took the viewer on an adventure through the reconquest of Europe. Excellent.

The Pacific. They tried to replicate Band of Brothers, and failed miserably. What’s left is an overstylized slaughterhouse without real characters and a lousy story.

Hell on Wheels. If you want to know how the wild west really was, watch this. Just kidding. But is a gritty and truthful story of the railroad with some great characters and atmosphere. I just hope they take it up a notch when it comes back.

The Client List. Another guilty pleasure. There’s something entertaining about the overdramatized life of suburban Texas… not really high quality

If I forgot a few, I will add them later. Feel free to comment below to let me know what your favorite shows are these days.